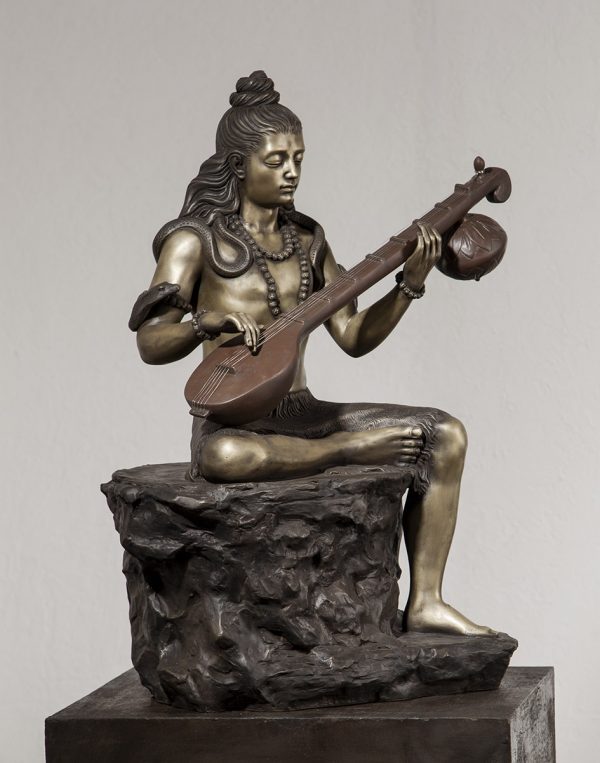 It is believed that Shiva was the original pro-pounder of the science of music in this world. He is supposed to be the progenitor of all sounds, languages, Music and Vibrations of the Universe.

After close observation, Shiva thought that the sounds produced by the mouths and tongues of various birds and animals maintain a harmonious adjustment with the undulations of the sound waves of the universe. The eighth step, the eighth note, of this harmony comes very close to the first note.

Based on the sounds of seven creatures, Shiva evolved the surasaptaka sá-re-gá-má-pá-dhá-ni; and at the eighth step, the first sound is repeated, although on a different level [of pitch].In [Western] music, we find do-re-mi-fa-sol-la-ti-do: in other words, do is repeated, and it is counted as part of the scale. That is why instead of saying surasaptaka [“seven-note musical scale”] [Western] musicians call their scale an “octave”.

The music of the present-day world is entirely based on these seven (eight) musical notes.

By permutation and combination different sounds, Shiva created various ragas and arranged them in a perfect orderly sequence. He created six(6) ragas and Thirty-six (36) raginis.

There are certain notations, both in instrumental music and in vocal music, which are very rhythmic. When these sounds strike the ear’s membrane they produce similar vibrations; concordant rhythmic vibrations are experienced.

It is a matter of great regret that people have forgotten this science of music, whose foundation was laid by the intense efforts of Shiva. Nowadays, instead of considering music as a valuable asset to spiritual practice, they take it as a hobby, a means of livelihood, or a mere pastime. The arduous effort, which Shiva invested in this science, is conspicuously absent today.

The sculpture is intricately made and dedicated to the contribution of Shiva, in the music. He is playing viina an ancient musical instrument.

This viińá is a quite simple stringed instrument. Over time this viińá changed into different kinds of viińás and viińs, the sitar, esraj, tamboura, violin and so many others. Some of them had frets and others not. Just think of it!