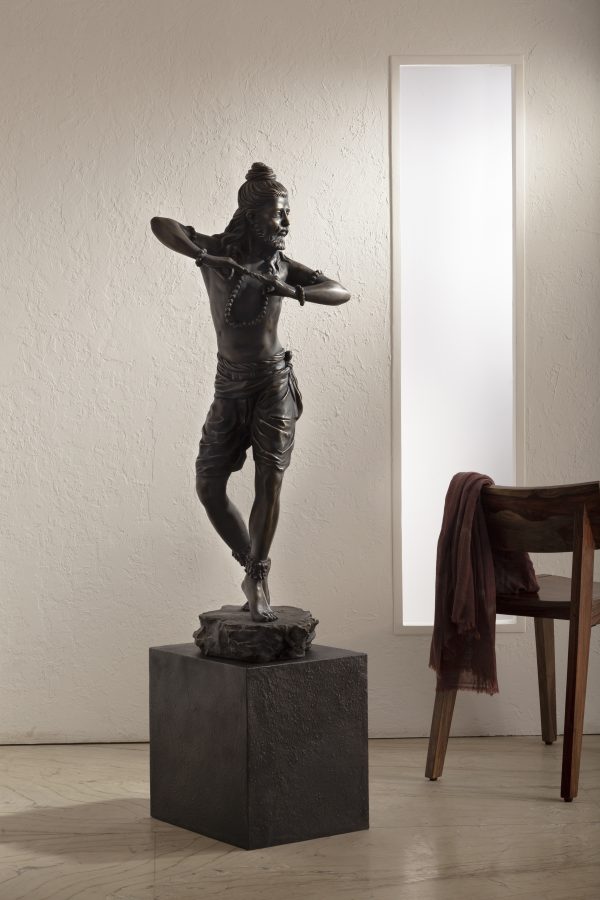 This sculpture is dedicated to the immense contributions of Bharat muni, to the aesthetics in human civilisation.

Bharata Muni, the ancient Indian theatrologist and musicologist who wrote the Natya Shastra, a theoretical treatise on ancient Indian dramaturgy and histrionics, especially Sanskrit theatre. He is considered the father of Indian theatrical art forms. There is also reference to a’di-bharat, or the first bharat muni, indicating that the natya-shastra has been written by many authors over time. The original Natya Shastra is supposed to have been much more elaborate.

Speaking of the time line of the original Bharat muni, one can conclude that he might have been a disciple of Lord Shiva (circa 7000 years ago). This is because Lord Shiva (or Maheshwara) and Brahma are only two entities who are prayed to (puja) to before any natya (drama which can include singing, instrumental music, dance, storytelling etc). Puja is considered to be different from yajina, a Vedic practice. There is ample reference to vedic gods and goddesses, but no idol worship. There is absolutely no reference to puranic gods and goddesses, not even the ra’sa liila of Krishna (whose time period has been established based on archaeological evidence as about 3500 years ago). If we accept that the Rk Veda was composed between 10,000 to 15,000 years ago, the Yajur Veda from 5000 to 10,000 years ago, and the Atharva Veda is certainly older than 3500 years. (In the Jain scriptures which Mahaviira Jain propounded 2500 years ago, there is a direct reference to the Atharva Veda, which proves that the Atharva Veda is older than the Jain scriptures.)

The first person to codify and systematise music and dance (here, music means instrumental music, vocal music and dance) is considered to be Shiva himself. A’di-Bharat was perhaps his disciple, who spread dance, drama and music among people. Anybody was free to learn dance without considering caste or community. The work of Bharata, is a fabulous, long and is a true theatrical encyclopedia. Natya-Shastra is a detailed compendium of technical instructions about the performing arts. It was meant as a practical manual for  production of successful theatrical performances, which included music and dance as well as acting. It was also intended as a guide to the poet and to the performer, alike. According to the Natya-shastra, the dancer-actor communicates the meaning of a play and transmitting emotion through the stylized movements of parts of the body along with music.

considered the most comprehensive form of art-expressions. Further, at the time the Nataya Shastra was compiled, the arts of poetry, dance, music and drama; and even painting, sculpture and architecture were not viewed as separate and individualized streams of art forms. And, even the components of the Drama of the Natyashastra-times later evolved and grew apart, assuming independent identities, such as: Opera, Poetic-drama, realistic plays and so on. Apart from these, Dhananjaya elaborates on the ten forms of the Drama (Dasa-rupaka) that were mentioned by Bharata.  Natyashastra presented  an integral vision of art, which blossomed in multiplicity.

All art expressions were , thus, viewed as vehicles of beauty providing both pleasure and education, through refinement of senses and sense perceptions. The object of the drama was to show men and women the proper way to live, a way in which one could live and behave, so that one might be a still better person.

Dance is customarily divided into two categories: gestural and rhythmic. Occidental dance gives greater importance to rhythm, while oriental dance forms gives more importance to gestural aspects. If one looks at the characteristics of dance, one must admit that both gestures and rhythm are important components of a dance: the gestures give expression to the inner sentiment, and the rhythm gives it dynamism. Gesture or mudrá used in the fine-arts as well as other cultural and tantrik expressions are supposed to have been introduced by Lord Shiva himself. Mudrá is “the externalization of internal feeling” and means “to express the desires of the mind”.

However, when considering Indian music, they are chiefly divided into two branches–one is related to the region north of the Vindhya mountains, that is, the land of the Aryans, and the other is related to the region south of the Vindhya mountains, or the Deccan peninsula. The style of the land of the Aryans we call Hindustani music in the spoken language and the style of the Deccan region we call Carnatic. Both styles were given by Shiva, but credit for bringing them to the public goes to Bharata.

By permutating and combining different sounds, Shiva created various rágas and arranged them in a perfect orderly sequence. Rather, he created six rágas and thirty-six ráginiis. This was an immense contribution to the world of music and earned him the epithet Nádatanu [Embodiment of Divine Sound] in the Vedas. Of course it was Maharśi Bharata who popularized these rágas and ráginiis .